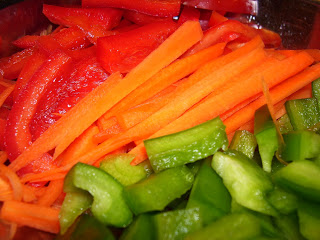 A few weeks ago yours truly, The Clean Eating Coach, came across a headline in the Washington Post’s Clean and Fit newsletter that caught my attention, “More Meat-less Meals.”  It suggested that one approach to a healthy, clean eating diet is to become a part-time vegan.  The article talked at length about well-known food writer and author Mark Bittman and his quest to both improve his health and minimize the environmental impact from large livestock.
Bittman adopted a vegan diet part of the time — he would eat vegan until 6 pm and then he enjoys whatever he liked after that.  But his shift to eliminating animal products and eating a much cleaner diet paid off – he lost 35 pounds over the course of three months.
I was drawn to this article because I’ve been toying with the idea of eating less meat for some time. And when I read it, it struck me that I pretty much practice part-time veganism too although it hasn’t been intentional. I didn’t wake up one day and say “today, I’m going to become a part-time vegan,” rather it unfolded through my weekly meal planning efforts and just felt right.
Since I do most of the cooking in the house, I plan the meals and do the grocery shopping.  I’m naturally drawn to more soups and stews in colder months and I often end up making vegan dishes that contain copious amounts of beans.  So in a very natural way, my husband and I started eating more meatless dishes at lunchtime and lots of healthy snacks in the afternoon – like red pepper strips with hummus and an apple.  And since we don’t eat meat with breakfast, it’s not so hard to go through a large portion of the day without any meat at all.
A while back I did plan a week of no meat at all, even with dinner. Bruce reluctantly went along with the program but he wasn’t so thrilled.  Even though we don’t eat a lot of meat (usually chicken, turkey and fish), he missed the opportunity to have meat and he kept reminding me how important protein is to his weightlifting routine.  Needless to say, we got through the week but he was definitely not into my plan to extend our vegan experiment another week!  Ironically, just the other day he suggested that we have another week of no meat at all and you know I was game. That’s coming up next week and I’ll share the details of our menu planning.
I can see how being a part-time vegan is something that can work in our home.  It’s a healthier, clean eating happy medium that’s balanced by some meat later on in the day but even that doesn’t have to happen every day and can be in small amounts.  Seriously, this is so much a healthier way to eat and live and it feels like it fits both our needs better than the all or nothing approach. And I have to say that after four to five months of eating this way, Bruce has shed roughly20 pounds so he’s reaping the health benefits and feeling great about how he looks.  To me, eating this way screams, “I want to prevent chronic disease,” and we’re both committed to that.
Have you tried being a part-time vegan? What’s your experience been like and how has it helped you create a healthier, clean eating lifestyle that supports preventing chronic disease?

lilmiscolor Follow
« Clean Eating on the Go: That Food Has How Many Calories?
Pumpkins Are Actually Good for Your Health »

How To Get Rid of Cellulite on Thighs Fast…

7 Essential Oils That Can Seriously Relieve Arthritis And…